On March 21, the Forest Day, students of Taipei European School, TES made contributions to Taiwan by coastal forestation 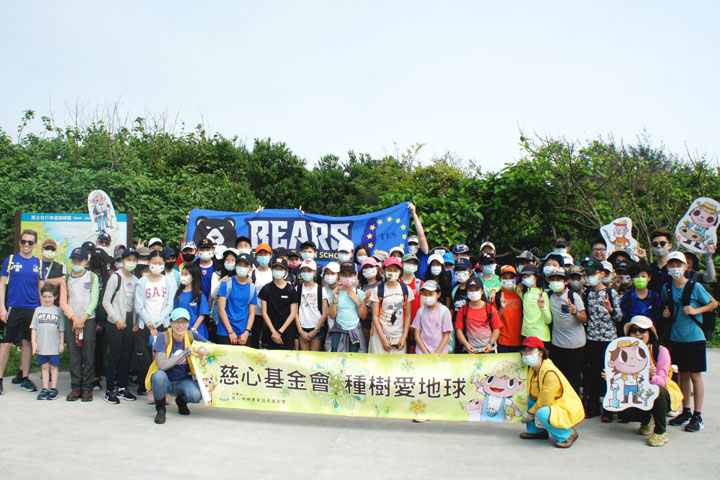 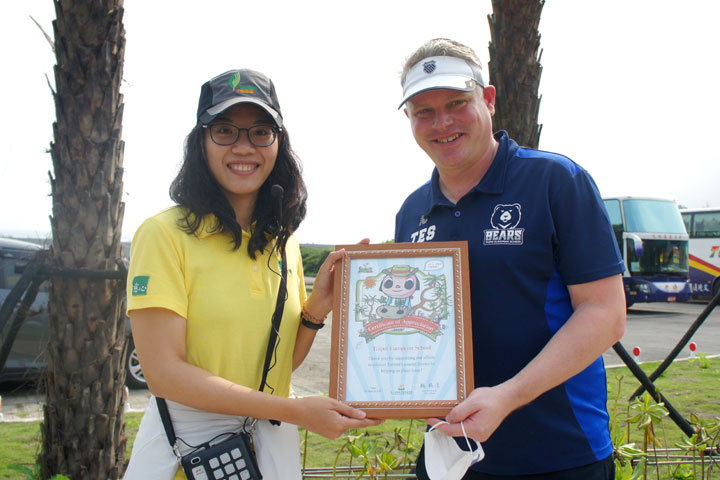 The Foundation issued a Certificate of Appreciation to TES, accepted by Mr. James, the Vice-Chancellor. 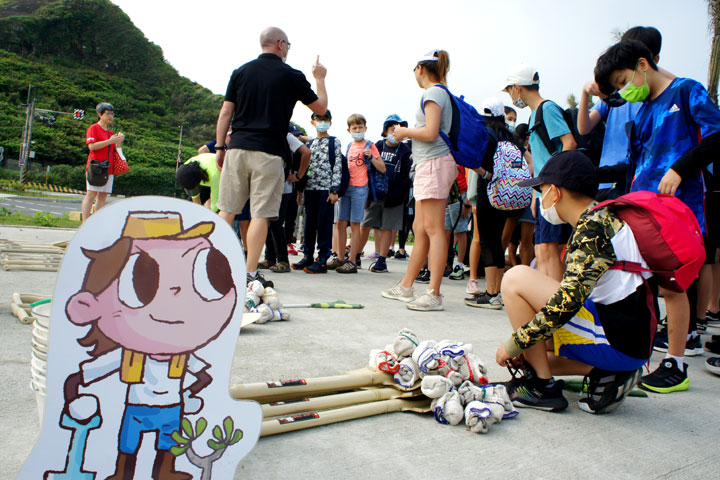 TES, known for their focus on community services to teach children on becoming global citizens, James Woodall, the Deputy Head of the British Secondary and High School Section, led 70 teachers and students to Wanli seaside to plant trees on March 20, 2021, the eve of the Forest Day. They planted 500 saplings in hope to extend Taiwan coastline.

On a rare sunny day at the normally rainy north shore, the TES big kids came from different parts of Europe, Asia and Taiwan just like a small event of the United Nations.In order for the tree planting to go smoothly, Tse-Xin Foundation, the Foundation tree planting team gave an on-line class the day before. To teach the kids about the importance of coastal reforestation and how the Water-Storing Tree Planters, the Planters would allow the sapling to grow better. Therefore, when the Planters holding the saplings, that they saw a day earlier on the screen, actually appeared before their eyes, excitement and anticipation were shown on their faces. 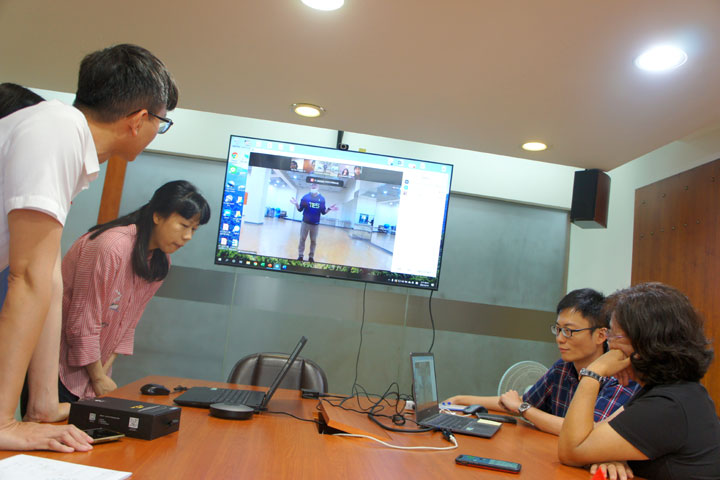 On-line class the day before, explaining the importance and method of tree planting. 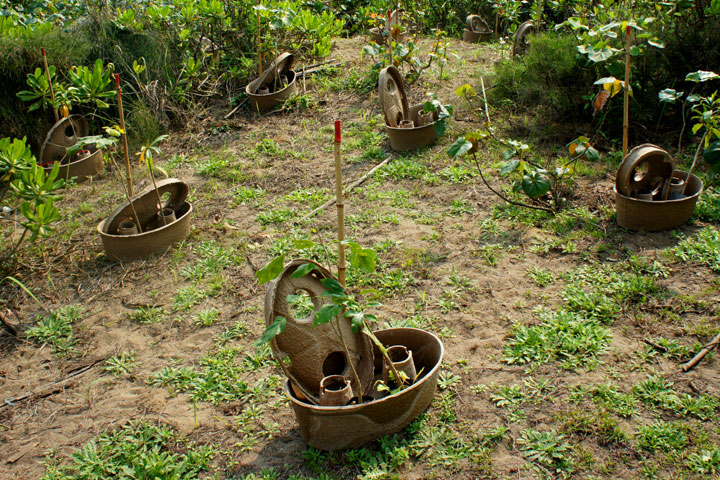 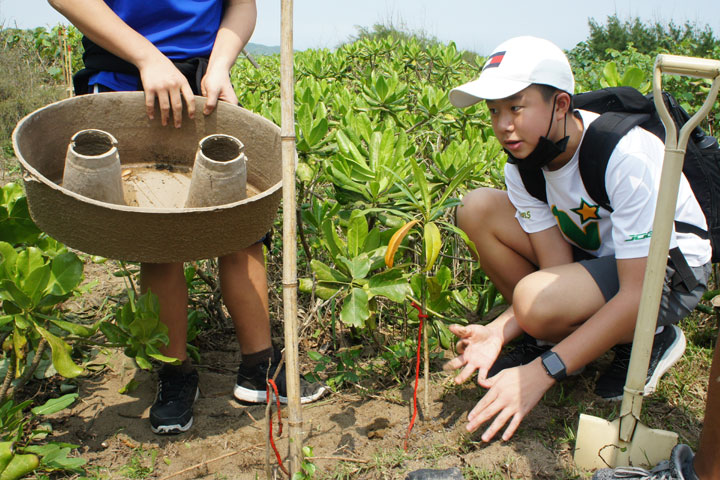 From unskilled to experienced, 500 saplings were planted successfully

After explaining the procedures, under the blazing sun, the children started digging holes, carrying water, putting fertilizers..., from unskilled to experienced they finished the job in less than 2 hours.Sara, from Belgium, and Poppy, from UK, were both happy to have attended this event. Sara had joined the Jinshan tree planting event last October, she was looking forward to seeing the saplings to have grown tall. As for the advantages of coastal forestations, they said, the trees would block the wind and sand, the Planters would keep the saplings from drying7 teachers came with the students. Mr. Galvin said, some of the rich kids had never done this sort of things before. This is a very good experience for them. They could also learn things other than tree planting. 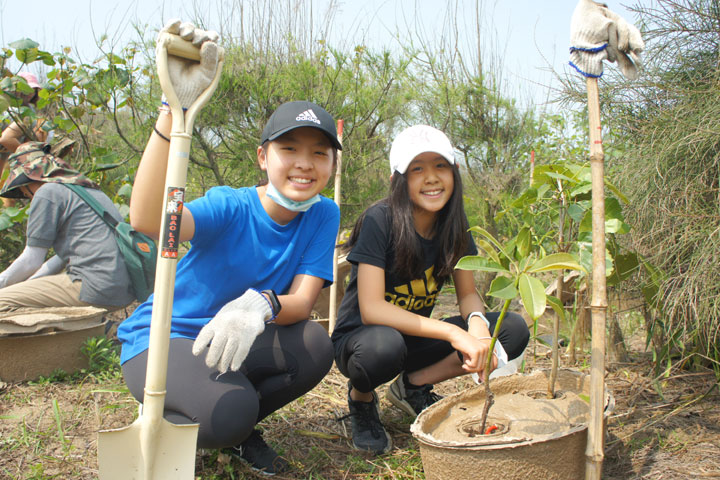 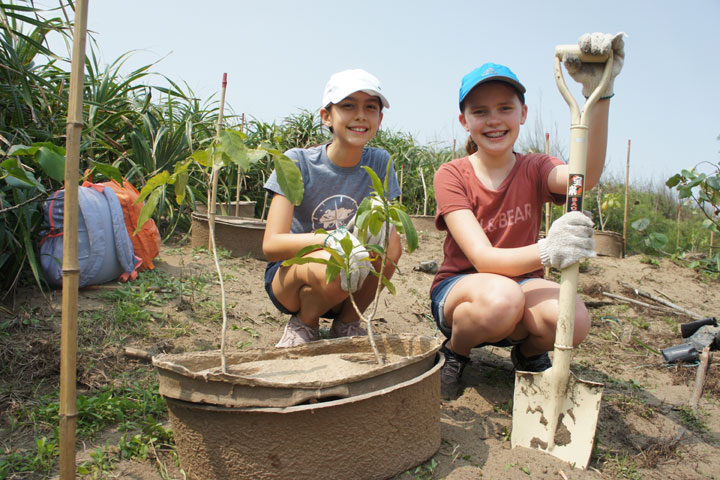 The girls said, the Planters would protect and help the saplings to grow successfully, they are amazing! 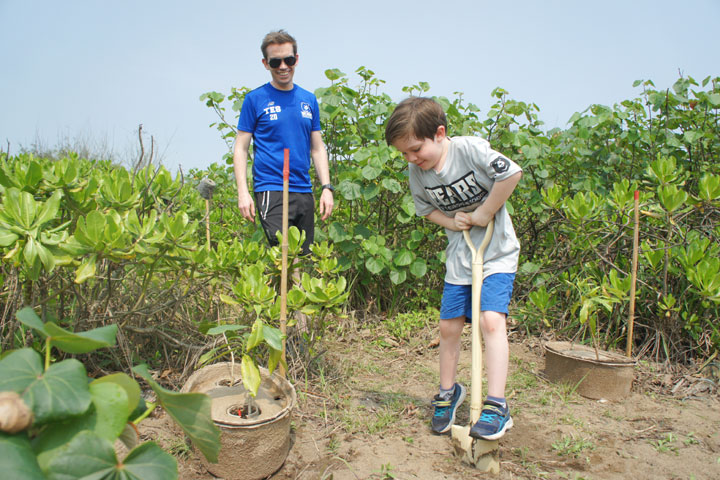 The only kid from kindergarten, did everything from digging to carrying water. He is just as capable as the big brothers and sisters. 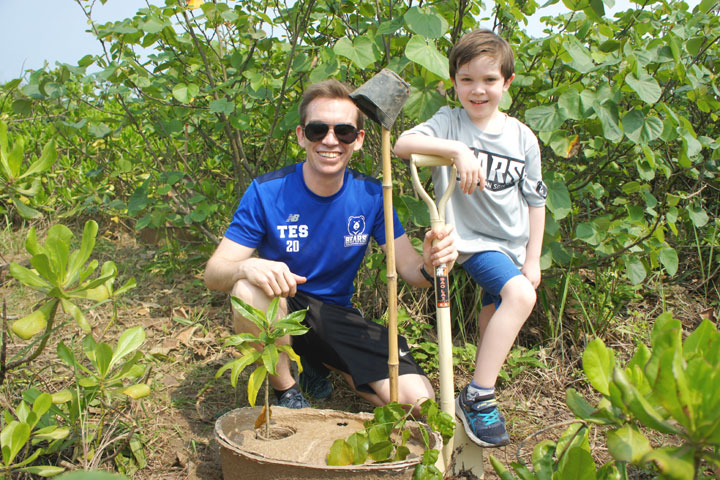 Hoping the children would be able to contribute to Taiwan

Mr. Raymond Imbleau, the 7th-grade director, who hosted this event, cared and observed them. He understood well how the children felt. He said, they’re really having a good time here, free as birds, neither parents, nor homework. They’re very happy.Mr. Imbleau indicated, our school encourages students to join environmental protection activities, if it weren’t for the restraints of the Pandemic, we would be happy to try more events like this.The silent seaside turned vibrant by the little angels. Wishing that the saplings would grow well like the kids and become green angels to protect Taiwan and the world. 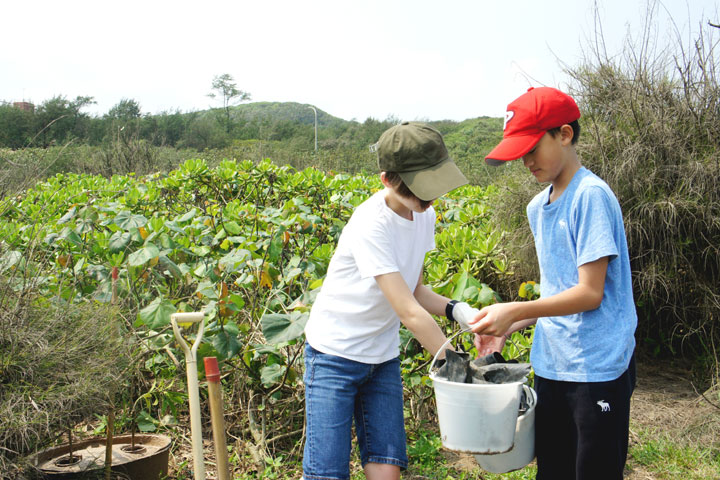 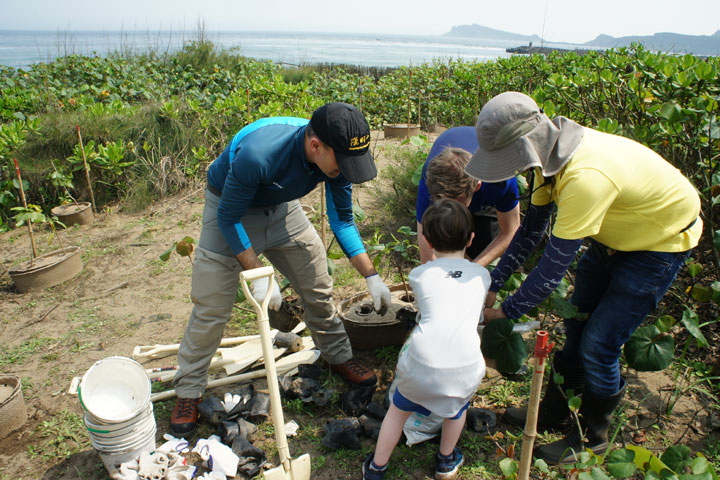 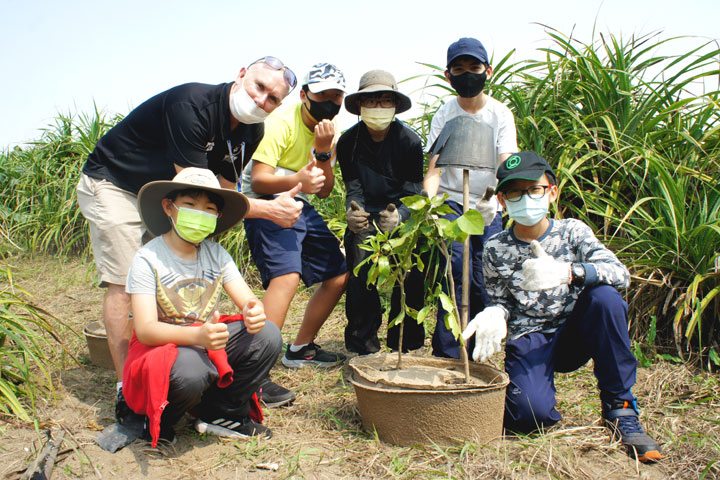 Regardless of race or nationality, planting trees to save the earth 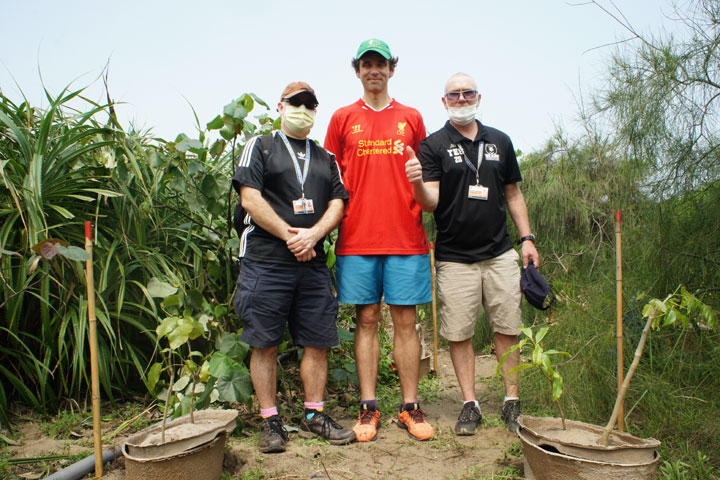 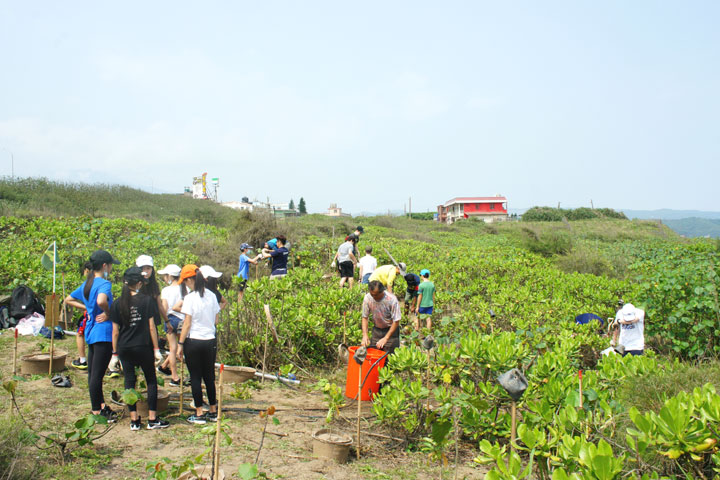 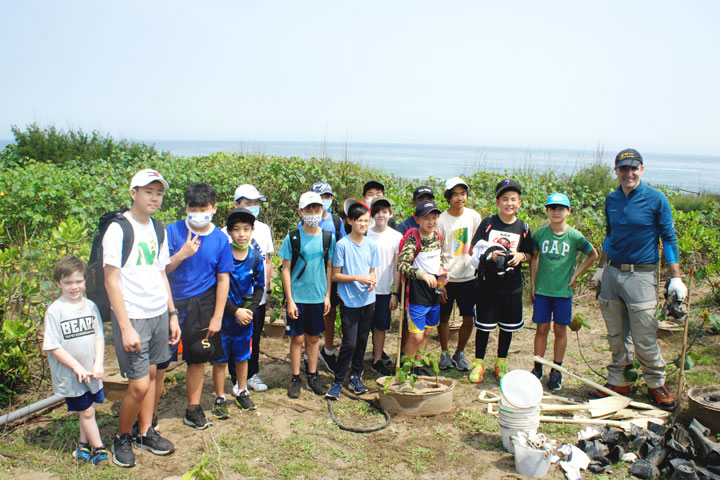 Helping each other, the kids finished planting 500 saplings quickly

Collaborated by the Foundation and Zen Zhou Social Enterprise, Ltd., the Planters were structurally inspired by the oriental ingot. They would collect and store rainwater or artificial hydration, and then convey the water into soil through guiding ropes using capillary principle. They would shield the soil around saplings from direct sunlight, avoid water dispersion, reduce direct hit of strong wind. Which would effectively increase the saplings’ survival rates, and hence increase growth rate. And made forestation faster. Furthermore, as they are made of recycled paper pulp, that would be decomposed within a year. 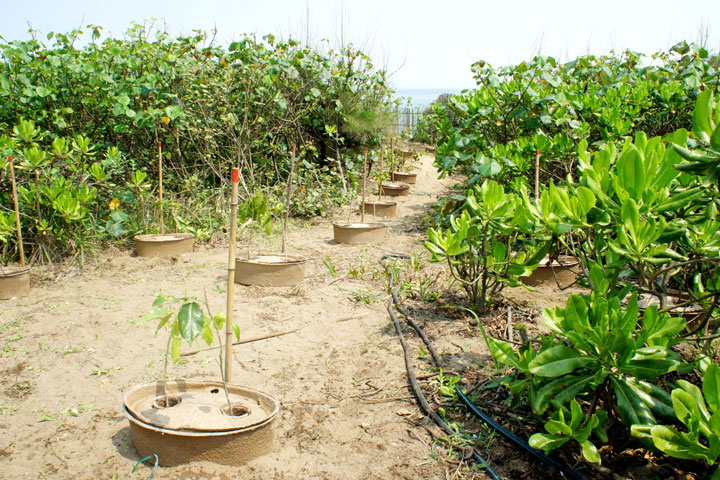